Torino, the capital of the Piedmont Region, is located in Northern Italy, a city having made history. According to the research, published on the website ArXiv and conducted by the astronomer Mariateresa Crosta (National Institute of Astrophysics) at Torino together with the archeologist Sandro Caranzano, Director of the Torino Herakles Center, it would seem that the burg emerged on January 30, IX BC, under the name of Iulia Augusta Taurinorum.

The urban, under the reign of the Savoy family, became the Capital of the Kingdom of Italy: the first Italian Capital, from 1861 to 1864.

Torino, beyond doubt, is a metropolis having its particular charm: there were reigns and its history was printed by emperors, kings, scholars, architects, politicians, writers, statesmen and singular characters who left indelible marks.

Important are the dwellings of kings and noblemen, to visit, beginning from Piazza Castello, for then arriving at the historic center, named "the living room" of the town. Here you can find palaces like:Palazzo 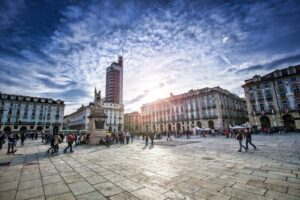 Even the beauty of some religious structures must be mentioned. These include the churches: la Gran Madre, il Duomo, la Chiesa della Consolata, la Crocetta, la Chiesa di San Lorenzo, la Chiesa del Corpus Domini, la Chiesa di San Filippo Neri, created by great architects, including Juvarra and Guarini. The holy shroud is kept in the Cathedral, hosted by the dome of the same Guarini, completely restored after an incendiary, in 1997.

The edifice Collegio dei Nobili is the location of the Egyptian Antiquities Museum bearing a collection of more than 5000 artifacts, thus, taking the second place after Cairo: it recently underwent a refurbishment work, making it a pioneering museum, embellished by the statue with a cinematographic character. 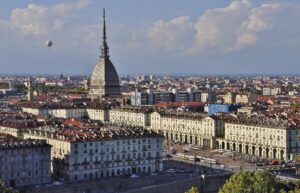 There is also to mention the building Mole Antonelliana, being now the location of the Film Museum, a perfect match between tradition and progress; The Gallery of Modern and Contemporary Art Galleria d’Arte Moderna e Contemporanea, combined with  the antique palaces like il Palazzo Reale, il Palazzo Madana, il Museo Nazionale del Risorgimento and many other suggestive attractions.

Torino is known as the City of Cinema. It has seen the birth of moving images, first and foremost in 1914, the ‘Cabiria’ by Pastrone with  textures by Gabriele D’Annunzio, and is confirmed, among the Italian cities, of having the largest number of cinemas compared to the number of inhabitants.

It also has an excellent cultural proposal in terms of conferences, dramatic representations and cultural moments. In this context, they prolific structures, productions, companies, while the theaters il Teatro Stabile and il Teatro Regio are distinguished as leading entities.

Torino is even a city with great esoteric and alchemic tradition. It is confirmed today as a magical city: it is one of the leaders, of the “white triangle” together with Prague and Lyon and one of the points of the “black triangle” with London and San Francisco.

After a careful observation, there are loopholes between the sobriety and the typical luxury of the nineteenth-century city, combined with a spotlight of youth vitality and color, an expression of a movement concentrated, in particular, around the wineries, pubs, bars and the famous aperitif, a nice tradition of which it has the paternity.

Because of its esoteric and cinematographic tradition and being a careful city of culture as well as art, we would like consider Torino as ideal location for the “Life Beyond Life Film Festival”.

Since 2016, every year, we have been organizing at Torino an international afterlife conference “Andare Oltre. Uniti nella Luce”, talking about current afterlife research and inviting persons, relating on themes of life beyond life, seen from different points of view.